Home > About Massey > News > Create1World – an antidote to climate grief

Create1World – an antidote to climate grief Climate grief and climate anxiety are real for this generation, say organisers of a Massey University event bringing together youth to share creative ideas and solutions to the climate crisis.

Hundreds of secondary school pupils will converge at Create1World conferences at Massey’s Auckland and Wellington campuses this month to take part in workshops, online and live panel discussions as well as view performances by poets, film-makers and musicians. The aim of the event, now in its fourth year, is to inspire and foster hope among young people in the face of daunting global issues confronting humanity, from climate change impacts to poverty, deforestation, plastic pollution and social inequality.

Create1World is hosted by Massey’s School of English and Media Studies and the New Zealand Centre for Global Studies. Co-organisers Dr Hannah August and Associate Professor Elspeth Tilley say many young people they have spoken to during the year are feeling angry and frustrated.

“Climate grief is real and it has many of them in the grip of fear and anxiety,” Dr Tilley says. Taking action “is a logical and healthy response to feeling frustrated and disempowered, which is just one of the many reasons why the school strikes are so important,” she says.

“Creative action is also an important form of response. It can be accessible to more people – not everybody is able to participate in a protest march – and it can help process emotional responses through catharsis or inspiration.

Winners of the Create1World Activism and Global Citizenship competition will be announced at each of the conferences (Wellington on November 14 and Auckland on November 21). Finalists’ work includes slam poetry, music, theatre, a poem in te reo Māori, and speeches on topics ranging from refugees and climate change to sexual consent. 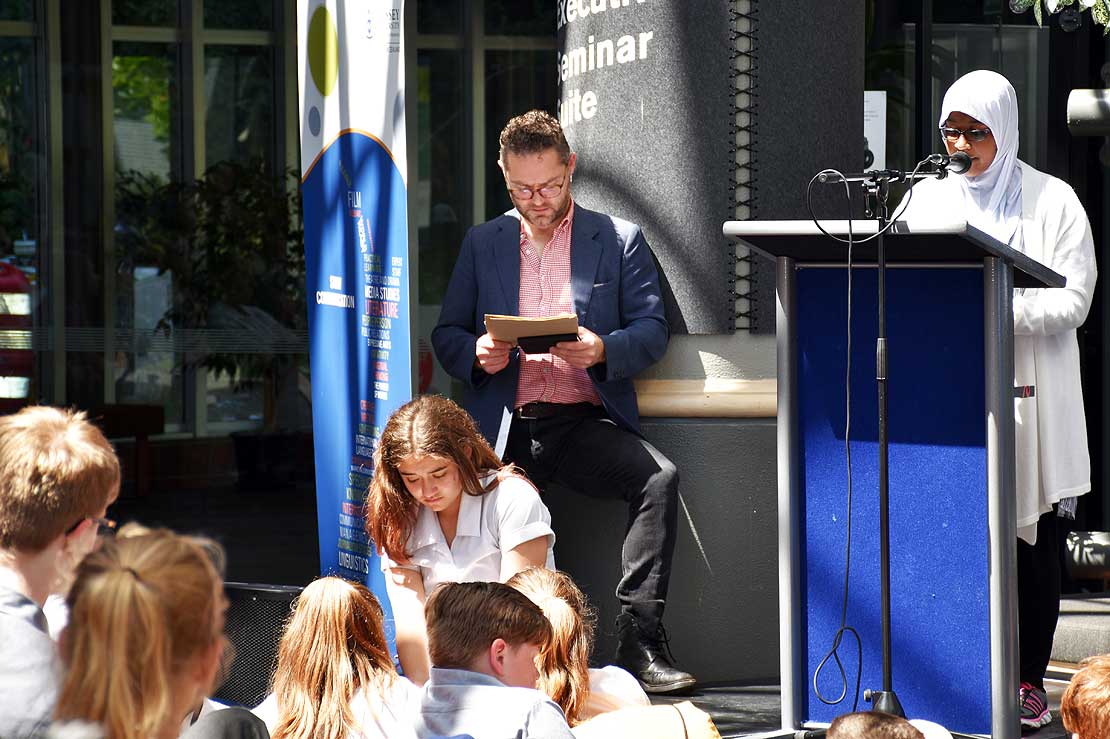 Professor Chris Gallavin (left) with Fatimah Khan, from Newlands College, reading her creative writing in 2018. She is a finalist this year too.

Dr August says using creativity to channel fear and concern about pressing global issues helps by bringing a human focus and increasing awareness. “Art and creativity can make a difference both to the person doing the creative work and to the audience they share it with.”

Wellington highlights include creative activist Waylon Edwards, of Whakatōhea, Ngāti Pikiao, Ngāi Tai and Ngāti Hine, and Diane Wong, who will beam in live from New York via an interactive video feed to talk about her work with Chinatown Art Brigade, an intergenerational cultural collective that uses the power of art to advance social justice.

Wellington-based actor, musician, writer and director Moana Ete, of Ngai Tahu and Samoan descent, and Abhishek Majumdar, an environmental and human rights playwright who will participate via a live feed from the United Arab Emirates, will also be on panel discussions.

Highlights for Auckland are Robbie Nicol, aka White Man Behind a Desk, who makes videos for social media to raise political awareness and engagement, and Alice Canton, an award-winning theatre director known for her work using theatre to tell the stories of Auckland's Chinese community. Workshops by Massey's award-winning creative writers and theatre practitioners, including Professor Bryan Walpert, Dr Jack Ross, Dr Rand Hazou and Stuart Hoar, are also on the agenda.

Secondary school pupils or teachers interested in attending Create1World are invited to register now, on: http://masseyblogs.ac.nz/expressivearts/2019/03/06/create1world-2019/