The dinner was held last night, the last day of semester two, at the Palmerston North Convention Centre, attended by around 200 students, staff and industry representatives. They celebrate students and alumni and give industry and educators a chance to network.

Massey Vice-Chancellor Professor Jan Thomas said the agrifood sector and Massey are closely intertwined. “The quality of the education we provide is all the better for the connections and integration we enjoy. Tonight we are all here to celebrate another year of outstanding achievement from our students. No doubt many of you will go on to bigger and even better things in your chosen careers and in your communities.”

One of the top awards, the Fonterra Farm Source Massey Agriculture Student of the Year, went to Bachelor of AgriCommerce student Megan Robertson.

Growing up on a dairy farm on the West Coast near Hari Hari, Miss Robertson knew from a young age she would work in the rural sector. As a Dairy New Zealand Undergraduate Scholar throughout her degree, she has taken all opportunities afforded to her. In her first year she completed her practicum report a year early and topped the class a year ahead of her. The award is for academic as well as practical achievement,

In July, Miss Robertson was part of a team that represented New Zealand at the International Food and Agribusiness Management Association conference and business case study competition in China. The conference theme was on how e-commerce is shaping global agribusiness. The team finished second in its categories, making it the New Zealand team to reach the finals.

Miss Robertson was also awarded the Young Farmers Club Sally Hobson Award for service to the club. She held roles each year of her degree, first becoming sheriff, then vice-chairperson and then chairperson this year.

This year the club launched the Rural Student of the Year, which saw 21 agricultural students at Massey clash in a series of agri-food challenges similar to the Young Farmer of the Year competition.

“Megan always has the club’s best interest at heart,” the selection committee said. “She has been a strong but fair leader. Keeping the committee on track and delegating tasks effectively, she has made it her mission to ensure all club members experience the full benefits of their membership. She will be missed next year but has set the standard for how a club should be chaired.” 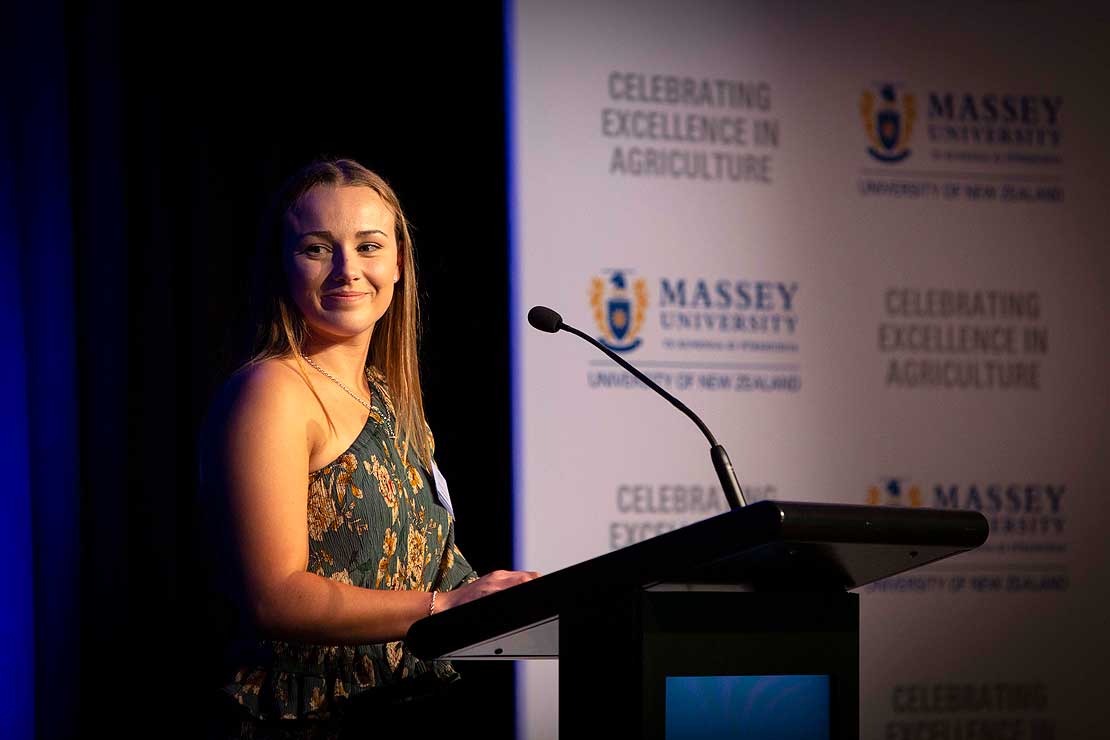 The William Gerrish Memorial Prize recipient was Bachelor of AgriCommerce student Grace Burmeister. The prize is for meritorious performance in various farm management papers and for demonstrating a high level of personal integrity, intellectual curiosity, vision and social conscience. The recipient must be interested in a career in farm management or agricultural economics.

Miss Burmeister has been a Dairy New Zealand Undergraduate Scholar for the past three years. She grew up on dairy farm at Mangatainoka that includes six hectares of bush as part of the QEII National Trust, which helped her develop a keen interest in environmental issues.

Farm and Agribusiness Management Professor Nicola Shadbolt said the short list for the prize included outstanding students who had excelled in their studies. “Miss Burmeister has a very strong academic record in farm management and sets high personal goals,” Professor Shadbolt said. “She has a passion for dairying, both on and off the farm, a good appreciation of global issues and their impact on agriculture now, and in the future. She demonstrates a high level of personal integrity and intellectual curiosity and has a strong social conscience – all values that will hold her in good stead in her future career.”

Zespri Award for Excellence in Horticulture

This award was won by Emma Simpson, who has just landed a job at Zespri, after completing her final year of a Bachelor of AgriScience (Horticulture).

“Throughout the duration of my degree Zespri has provided me with many valuable experiences,” Miss Simpson said. “Through summer work placements, international experience and in class visits, which has greatly expanded my knowledge and love for the New Zealand kiwifruit industry. These experiences and connections have now provided me with the awesome opportunity to work for Zespri after graduation and I am looking forward to working within a dynamic and innovative company like Zespri.”

The night also acknowledges the achievements of alumni, with a Massey Graduate Agriculture Alumni Achievement Award for showing innovation, leadership, community, development or entrepreneurship within the primary industries. This year it went to Jessie Chan-Dorman.

Mrs Chan-Dorman worked part-time as a lab technician at the Fonterra while studying animal science at Massey, graduating with Bachelor of Science (Honours) in Animal Science. Since then she has worked in a range of rural professional positions. Mrs Chan-Dorman is a director of Ruralco and the Ashburton Trading Society, a rural supplies cooperative, as well as being a director of the Biosecurity Research Centre. She is a former dairy woman of the year, and former Fonterra Shareholders councillor. She has a dairy farm in Dorie, Canterbury with her husband Hayden which has a herd of 900 cows on 420 hectares. Students were asked to create a photo or video to answer the question, “What is your favourite thing about being an Ag Student at Massey?”

Bachelor of AgriCommerce student Lachie Davidson won the competition for the second year running with his video. The win caps of a successful year for the Mr Davidson who won the 2019 World Egg Throwing Championships in London earlier in the year with team mate Ben McColgan.