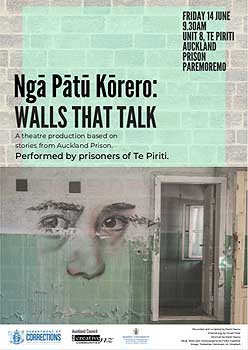 Poster for performance by prisoners.

Stories of prisoners’ lives usually stay locked up – but a group of male prisoners in Auckland has had the chance to study performance techniques and to share their experiences of being behind bars through a special theatre project led by Massey University.

Walls That Talk: Ngā Pātū Kōrero– a documentary theatre project led by applied theatre specialist Dr Rand Hazou – has been in the making for the past few months and culminated in a recent performance to a select audience at Auckland Prison, Paremoremo.

“Despite our high incarceration rates, we hear very little about the reality of prison life, and the personal experiences of those caught up in the criminal justice system remains largely invisible,” Dr Hazou says. “The aim of this theatre project was to challenge this invisibility by allowing the voices of prisoners to be heard on stage.”

The theatre project provided a creative and therapeutic forum for prisoners to reflect on and better understand their life experiences both inside and beyond the prison walls. Dr Hazou says access to the arts in prison is a human rights issue. “We need to be supporting an engagement with the arts in prison because corrections is a system that often dehumanises people,” he says.

Comments from several prisoners captured the impact of translating their stories into art. “It added to my confidence,” according to one participant. “It’s given me more encouragement to do things, so a bit more direction of how I want to do things. So, when I see something, and I put my mind to it, I know I can do it, so it’s given me that motivation to keep pushing on. I didn’t really think I could do this stuff, it’s been a bit of an eye opener for me. It’s given me a bit of a sense of connection too, a sense of unity.”

“You have your mask in the theatre, but everybody every day in the world is wearing masks,” another prisoner says. “This is about tapping into emotions, personality and psyche, and realising that the mind is the most complex thing. And in drama, you actually tap into all that.”

In creating the production, Dr Hazou developed interview questions based on Te Whare Tapa Whā (the four cornerstones, or sides, of Māori health) – a model developed by Sir Mason Durie.

“We asked questions about physical health, emotional wellbeing, spirit or wairua, and family health. We then worked with [scriptwriter] Stuart Hoar to pull extracts from the transcribed interviews into a play that the men then performed. The play deals with issues of wellbeing from the experience of the prisoners in Te Piririti [sex offender treatment programme at Auckland Prison].”

Dr Hazou, a senior lecturer in theatre in the School of English and Media Studies at the Auckland campus, says the indigenous model of wellbeing, using the metaphor of the wharenui or meeting house with four walls, was central to the theatre work. “These walls include taha tinana [physical health], taha wairua [spiritual health], taha hinengaro [mental/emotional health], and Taha whānau [family health]. Within this holistic model, each wall is necessary to the strength of the building.

“The actors in this production are not performing their own stories. But they have applied themselves to the task of finding the truth of the characters they are portraying,” he says. “Throughout the performance the cast of characters erect walls and comment in on how prison impacts on aspects of the physical body, the spirit, mental and emotional states, and on family and social relations.”

This project was built on workshops and performances held two years ago and facilitated by Canadian David Diamond, artistic and managing director of the Vancouver-based company, Theatre for Living, as well as on the production of Puppet Antigonedirected by Dr Hazou and the late Derek Gordon, staged by prisoners in December 2017.

Walls That Talk: Ngā Pātū Kōrero is part of a larger project called Prison Voices, a creative collaboration with Dr Sarah Woodland from Griffith University, Brisbane. It includes recorded interview material with the participants at Auckland Prison to be edited into a creative audio work or radio drama.

Dr Hazou has worked across a variety of creative and community contexts. These include in Palestine in 2004, when he was commissioned by the United Nations Development Programme (UNDP) to travel to the Occupied Territories to work as a theatre consultant running workshops for Palestinian youth. His research on asylum seeker and refugee theatre has been published in international journal articles.

He is coordinating the Performing Arts and Justice Symposium (September 5-6) at Massey’s Auckland campus to bring together performers, arts practitioners, researchers and justice professionals to explore the potential of theatre and the creative arts to transform the justice system.

Visit the webpage for information on keynotes and registration. http://bit.ly/2IR9CuE

Can the arts transform our prisons?
Reform and rehab – life in NZ prisons examined
Inmates explore morals in Greek theatre
Theatre workshop ‘outside the box’ for prisoners

Do a third of Americans really hate their own country?